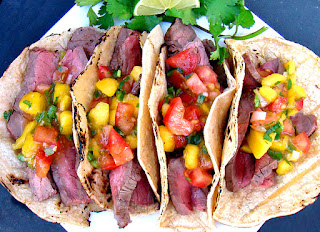 
Summer is here and it's time to fire up the grill ! I LOOVE Southwest flavors and dishes, so I made a really simple Southwest rub for the Aussie Grass-Fed NY Strip. The lean meat takes rubs and marinades really well, so it was the perfect way to spice up the meat without adding calories and fat! The fresh and delicious mango salsa REALLY complemented the meat and made this meal so bright and flavorful!

In a mixing bowl, combine all ingredients and stir until combined.
Posted by Heather Walker at 5:32 PM No comments:

Get your Cinco on with some AUSSOME dinner recipes, using Aussie grass-fed beef!   These easy tenderloin skewers are delicious with a tomatillo-based, salsa verde marinade (courtesy of A Merry Recipe), and the Top Sirloin shredded Machaca Nacho Cups are super simple in the crock pot.

Don't forget the tacos!  These strip-sirloin street tacos are slow-roasted in the oven with a brisket-style sauce, caramelized peppers and onions, and a DELICIOUS Mexican Street Corn Salad!

Steps:
Preheat oven to broil (highest setting).
Place the strip sirloin in a large roasting pan, fat cap up. Use a sharp knife to make 10 slits in various places in the meat.  Fill each slit with a peeled garlic clove.
Place the meat in the oven and broil on high for 10 minutes.  Remove from heat, turn over and broil for another 10 minutes on the other side. Remove from the oven again, and reduce the oven heat to 300 degrees.  Add the beef broth to the roasting pan, cover the pan with foil and return to the oven to cook for 1 hour.
Heat the oil in a large skillet.  Add the onions and peppers and cook for about 20 minutes, stirring occasionally, until well caramelized.  Set aside until ready to use.
In a large mixing bowl, combine the ketchup, chili sauce, turbinado sugar, onion powder, garlic powder, steak seasoning, salt and pepper.  Stir with a whisk to combine and set aside.
After 1 hour of cooking, remove the meat from the oven.  Turn the meat over again so the fat cap is up and cover completely with the ketchup mixture, allowing any extra sauce to drip over into the juices on the side. Cover the sauce with the peppers and onions.  Cover the pan with foil again, return to the oven and cook for one more hour.
Remove the meat from the oven.  Cut the meat, peppers and onions together into bite size pieces with a sharp knife and return all the meat and veggies to the juices in the pan. Remove any large fat pieces if desired.  Stir well to combine and serve with tortillas, Mexican Street Corn Salsa (recipe below) and some queso fresco!

Posted by Heather Walker at 10:28 AM No comments:

If you're like me you LOVE dyeing and hiding Easter eggs with your kiddo, but you're TIRED of the same old leftover hard-boiled egg recipes.  Egg salad sandwiches and deviled eggs are fine, but what about some REALLY delicious, over-the-top, quick and easy brunch or dinner ideas ?!  Now, THAT sounds like something I'd be excited to cook AND eat! 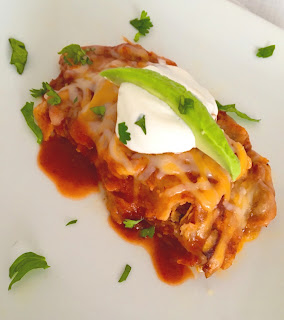 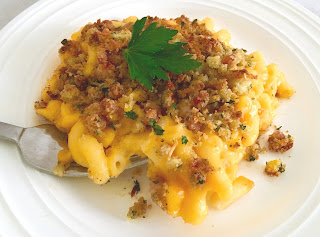 Steps:
Posted by Heather Walker at 6:51 PM No comments:

OK, it's crunch time.  Bikini season is right around the corner.  We made it through Easter and St. Patty's Day. If we can keep it light until cinco de Mayo, I think we'll be ready for summer!  Here are  a couple of light and easy dishes for spring that will still impress your guests and family!

Posted by Heather Walker at 1:11 PM No comments:

LOTS of moms out there are dealing with egg allergies these days, or even kiddos that just don't want to eat the leftover hard-boiled eggs!

This is a great way to carry on the tradition of dyeing and decorating eggs without the leftovers and allergies!

I'm LOVING the flavor and benefits of True Aussie Grass Fed Beef! I've been looking for a way to add lean protein to my diet, as I'm faced with the task of managing my high cholesterol. This is the perfect solution!

It's naturally lean, since the cows are 100% grass fed, and has a super high-level of Omega 3 fatty acids; the same components found in salmon and fish!

Leaner meats cook faster than fattier cuts (about 30% less cooking time), so be sure to turn down the heat by about 50 degrees from your normal grilling temperature and be sure to flip it only once during cooking. Happy grilling!!!

Click on the link to view the Good Morning Arizona Segment:

http://www.azfamily.com/clip/13107988/benefits-of-grass-fed-beef-vs-grain-fed-beef
Posted by Heather Walker at 5:03 PM No comments:


No matter who you were rooting for, Super Bowl LI was legendary.  It can't be re-created.  But you CAN re-create the food that was served!

Our guests LOOVED that we had a True Aussie grass-fed beef slider for each team, with ingredients that are significant to that team's region.

We asked each of our guests which one they liked the best, and the winner was ATLANTA...hands down!  But the reason?  Because you could REALLY taste the great flavor of the BEEF!

If you haven't tried grass-fed beef, you're missing out on the incredible, rich flavor, the lean but juicy and tender texture, and all the health benefits of eating grain-free beef, like lower cholesterol and higher Omega-3 fatty acids!  Add the flavors of grilled balsamic peaches, or Boston baked bean hash browns and you've got a party!


Posted by Heather Walker at 10:29 PM No comments:

Well, the holidays are over, school's back in session, sports are starting back up and our normal, busy lives are back in full swing.  WAAAAAAHHH!!!!

It's back to weekend warrior meals and quick, easy fixes for the weeknights.  These are a few of my favorite weekend meals that usually take time to cook, layer, bake, etc. But I turned them into rich, hearty comfort food soups, that work PERFECTLY as a cure for the weeknight woes!


Posted by Heather Walker at 9:51 PM No comments:


Let's face it...for most of us, New Year's Eve is more about consuming a few (too many) cocktails.  If you're hosting a party, you're probably more concerned about what kind of bubbly to serve at midnight than you are about the appetizers being passed around on trays.

Get some food in those bellies before the clock strikes!  Here are 9 quick and easy amazing appetizers for your New Years Eve Bash! Each of these is ready in just about 30 minutes or less, so you won't spend too much time at the store or stove!


Gorgonzola Stuffed Figs in a Blanket with Honey Balsamic Glaze


Posted by Heather Walker at 6:54 PM No comments:


These are the little winners that brought home $15,000 on Bakers vs. Fakers!  They're easy to make, look fantastic and taste even better!

Place a stuffed apple pie into the center of a serving dish. Pipe or spoon about 1/4 cup of the meringue on top of the apples. Quickly toast the meringue with a butane torch. Place 1-2 of the pie crust leaves in the meringue. Sprinkle with a bit of the remaining bacon. Garnish the top of each apple with a mint sprig and serve.

Posted by Heather Walker at 8:52 PM No comments: